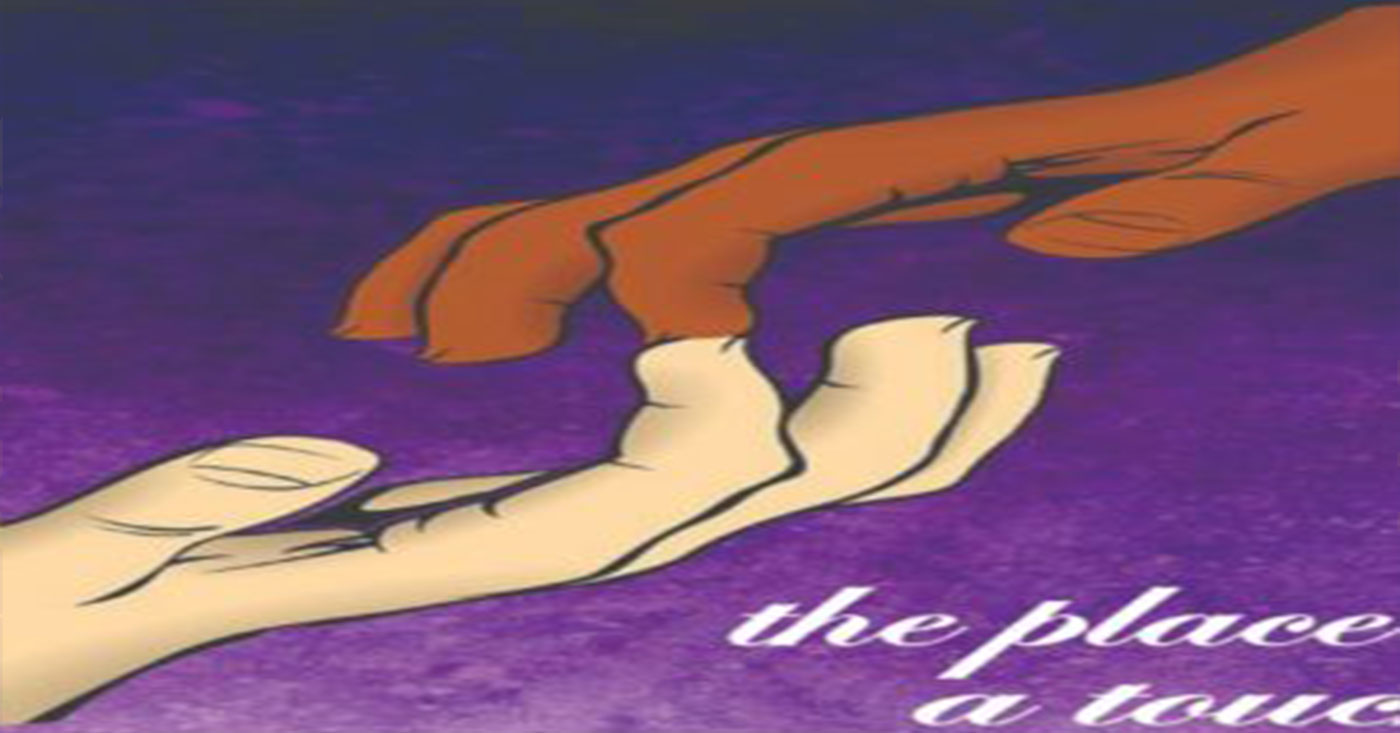 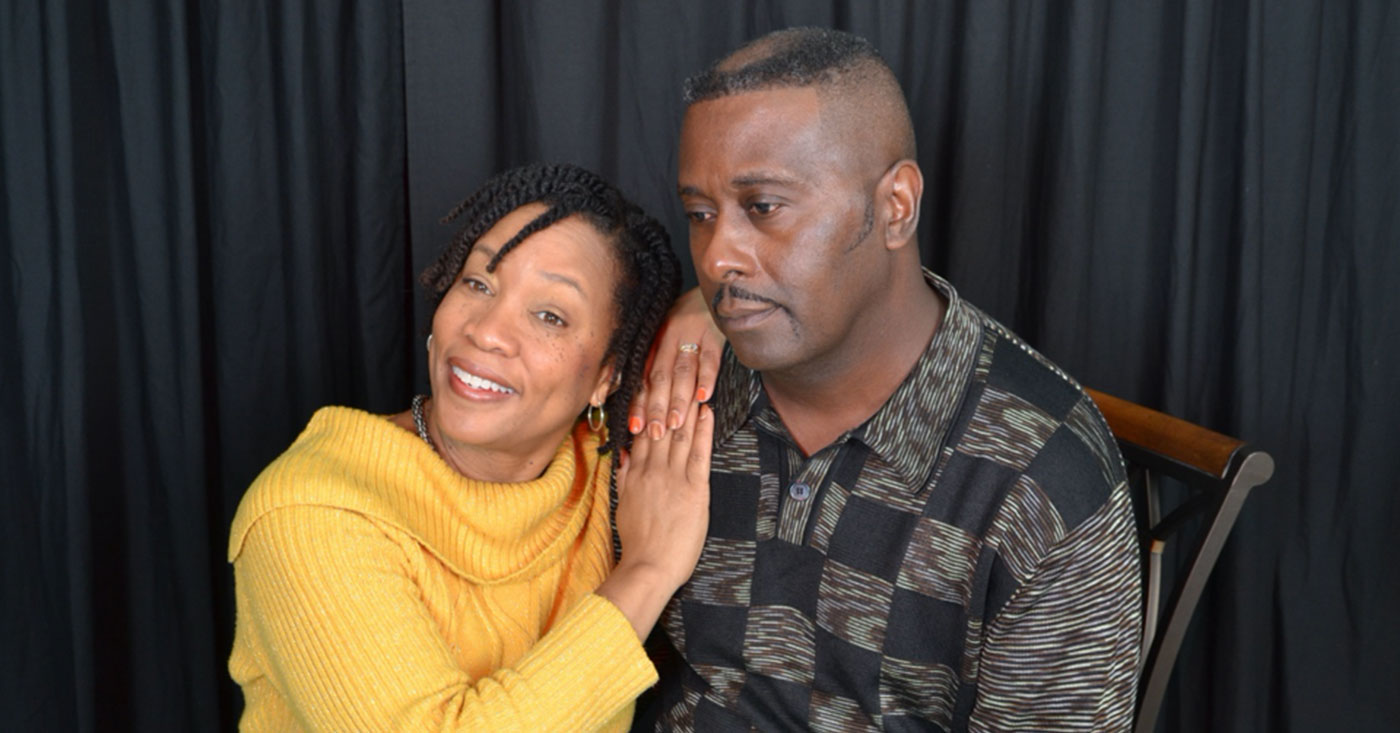 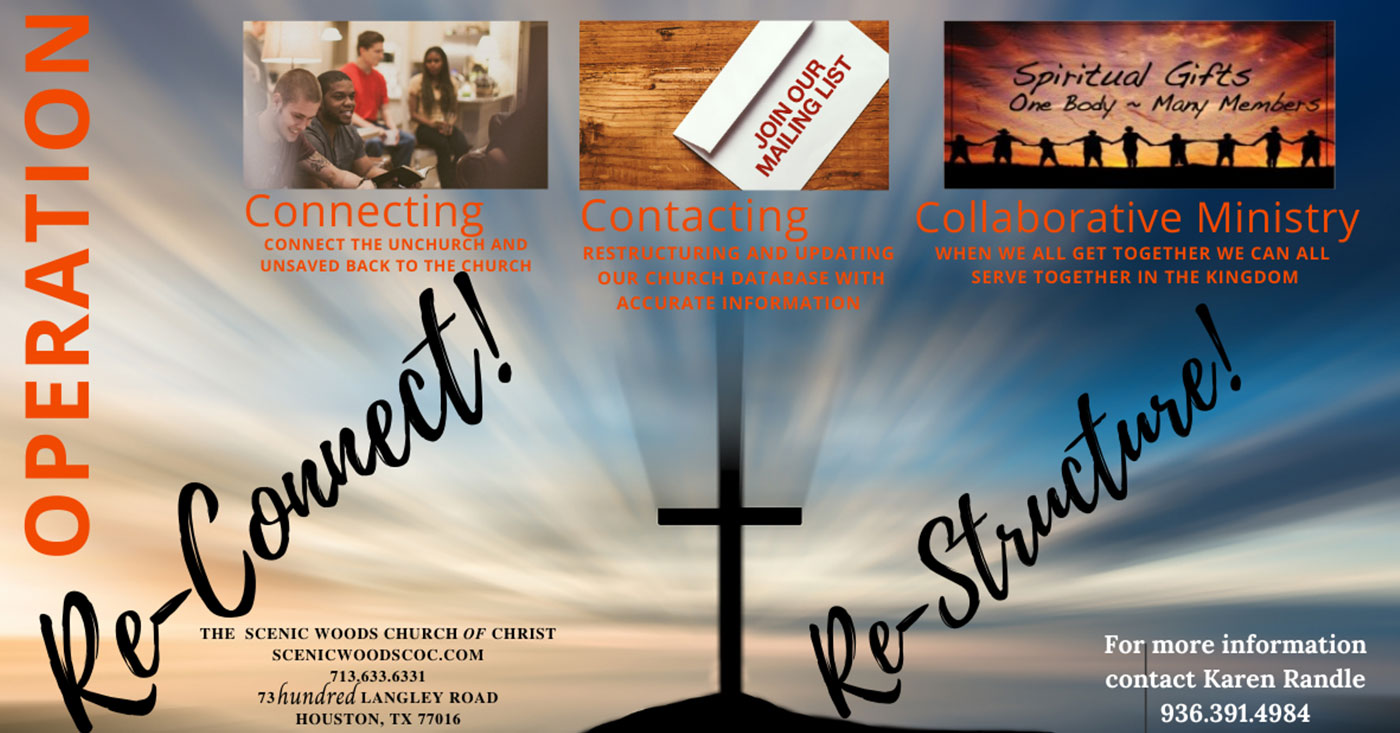 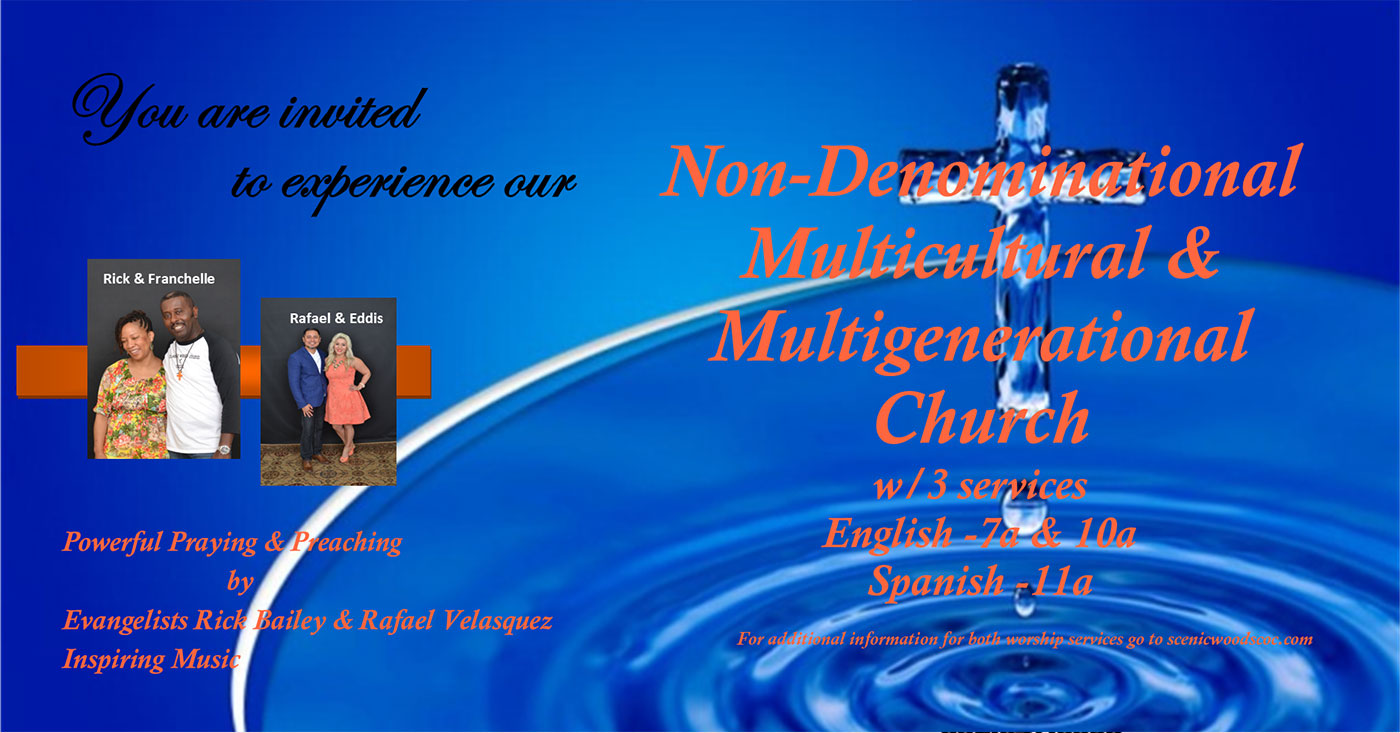 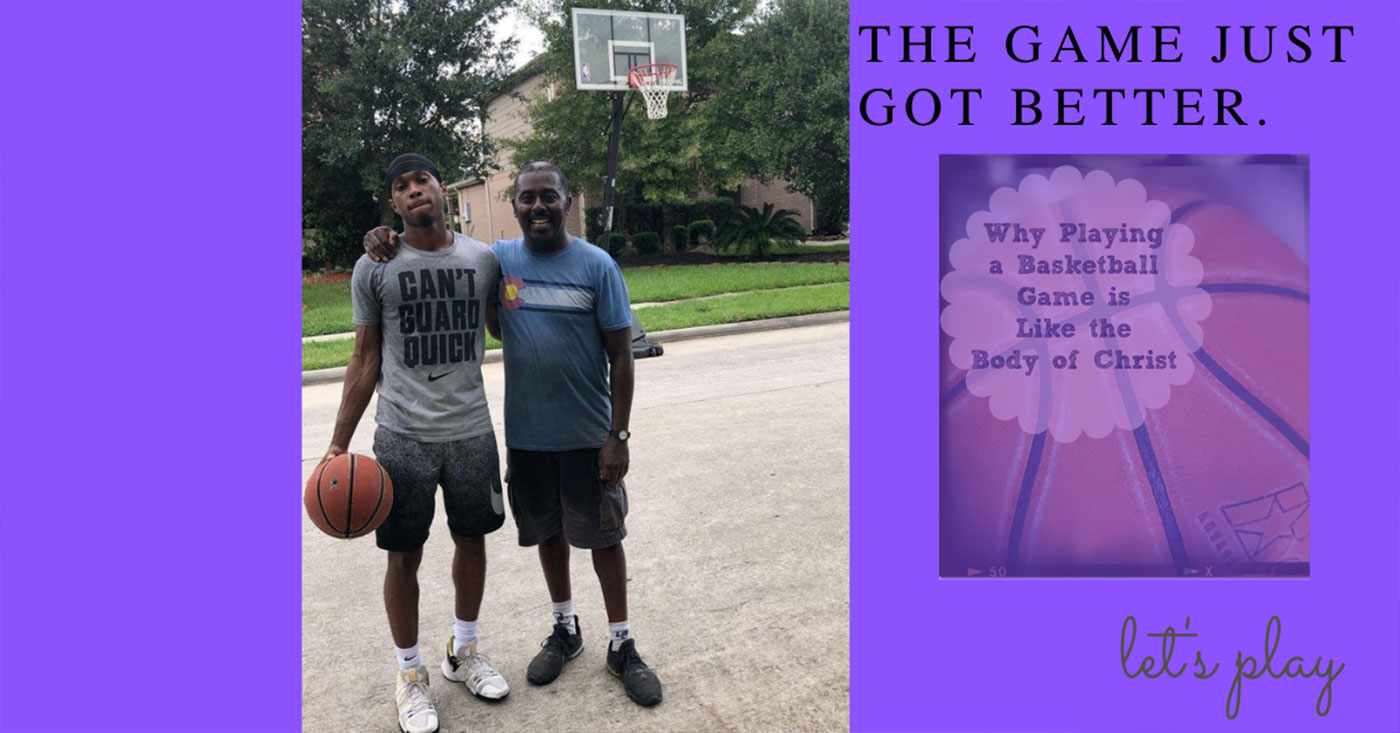 Welcome To The Scenic Woods Church of Christ!

Vision 2026 is a multidimensional, short and long-term strategic effort, that has been inspired by God and scripture to promote motivation, organization, prioritization, participation as well illumination for God’s people who reside in Houston, Texas. This effort will ensure that we grow from imagination to manifestation! Proverbs 29:18

The Church of Christ in Scenic Woods is a family of believers bound together in Christian love. We are not perfect and readily admit it, but we serve and follow Jesus who is perfect. In that way, we are a 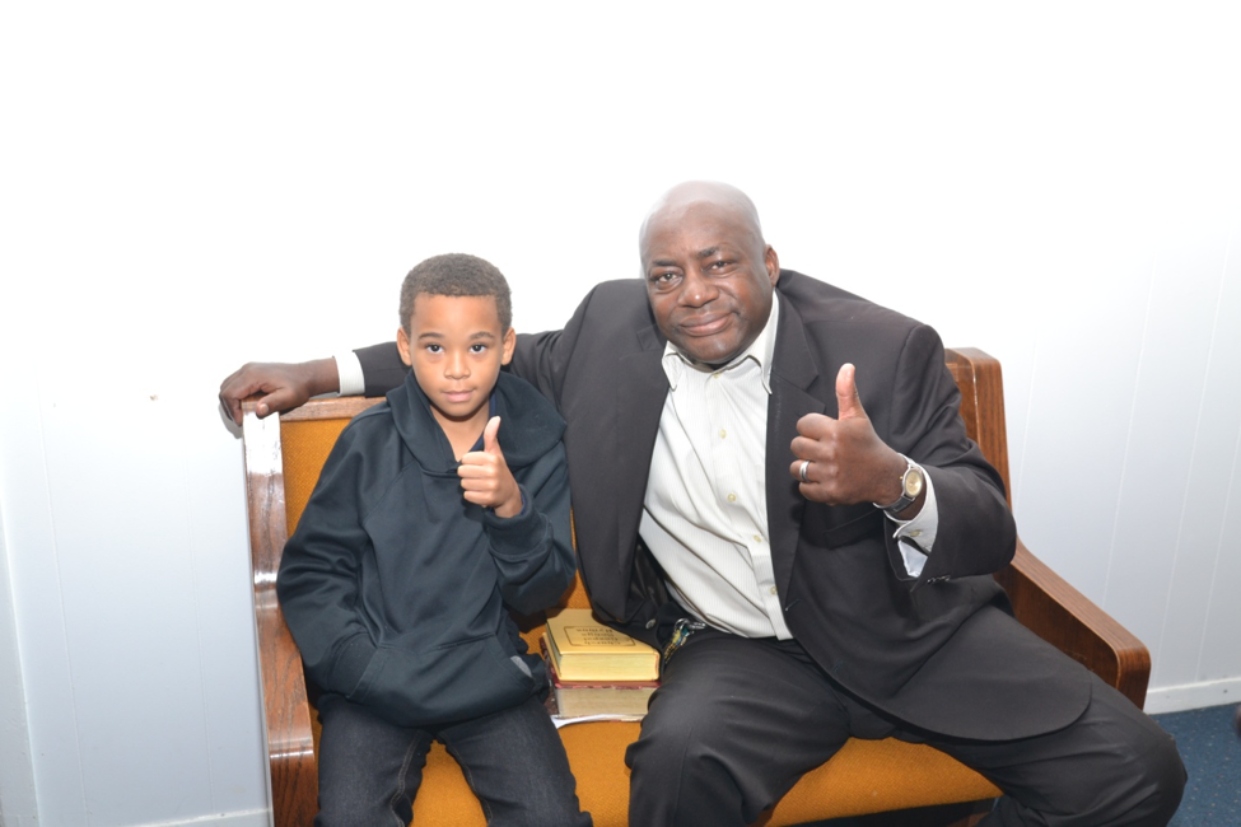 The Church of Christ in Scenic Woods is a family of believers bound together in Christian love. We are not perfect and readily admit it, but we serve and follow Jesus who is perfect. In that way, we are a church where people can find acceptance and forgiveness and discover the depths of the Christian faith. Our mission is to bring people to Jesus and help them become fully devoted followers who demonstrate God’s love through service.

The Church of Christ in Scenic Woods draws their beliefs entirely from biblical teaching. One of the famous mantras of the churches of Christ is: “Speak where the Bible speaks; be silent where the Bible is silent.” It’s meaning is obvious.

Whatever the Bible clearly says and can be clearly understood is what the Church of Christ in Scenic Woods will uphold. It also means that whatever the Bible does not speak clearly of is open to personal interpretation. This helps maintain a solid unity on indisputable core truths and a position of liberty on matters of personal understanding.

The core truths upon which we all agree according to biblical teaching are as follows:

We believe in the one true God existing in three persons: the Father, the Son, and the Holy Spirit.

We believe in the Bible as the only authoritative, infallible, and inerrant Word of God.

We believe in the deity of Jesus Christ, his virgin birth, his sinless life, his teachings and miracles, his crucifixion and resurrection.

We believe in the Holy Spirit as the indwelling presence of God received by all Christians upon baptism.

We believe in salvation as the free gift of God’s grace.

We believe that becoming a Christian begins with an absolute faith in Jesus Christ as God’s only Son and that such strong faith motivates one to confess his or her faith, repent of sins, and be baptized for the remission of sins. This is drawn from: John 3:16, Romans 10:9-10, Acts 3:19, Acts 2:38 and Mark 16:16.

We believe the church is composed of all those who have been born again according to biblical teaching.

We believe in the second coming of Christ, at which time all people from all time will be judged by God.

As an edifice was constructed to serve the needs of the church, this congregation flourished. As the congregation grew and matured, a second structure was needed to accommodate the growth. It is in this second building that we currently use as our worship center and the first structure is primarily used as a fellowship hall.

During this time, the congregation’s ethnicity, just as the neighborhood is surrounded, differed from what it is today. The congregation was called Langley Road Church of Christ. After a short period, the church began to integrate as other families placed their membership or became baptized there. There were about 25 members at this time.

One instrumental member that contributed to the work of Langley Road Church of Christ, in addition to Bro. Taylor was Bro. Coffman who later became the minister after Bro. Taylor left. In 1968, a young man from Abilene Christian College mover to Houston to work with the congregation, He met our own Bro. Ravenell and encouraged him to assist by teaching occasionally. The young minister became too ill to continue to serve so Bro. Ravenell accepted the work in 1969.

Shortly after, other families placed membership at the church: The Powers, Alexander, and McCutcheon families to name a few, adding to a more integrated congregation. Previous members continued to commit themselves to the congregation and it’s growth as well; namely, Bro. Hopkins and family, the Lyles, Cooks, Abstons, Meadows, and Sis. Russle and family continued to be very dedicated to growth and development. The Reagan State Bank held the mortgage to the property.

In 1970, the Henderson, Wilson, and Williams and family placed membership at the church. During this time, Bro. Ravenell, Bro. Powers, and Bro. McCutcheon transitioned into the church’s trustees after previous members left the congregation. In the process of this transition, the trustees discovered that the mortgage holders had written Scenic Woods Church of Christ instead of Langley Road Church of Christ and would not redo the paperwork. Thus, we became the Church of Christ in Scenic Woods in late 1971 or early 1972.

In 1973 the need to build a larger building arrived because of the of the tremendous growth and enthusiasm. By 1974 all was put in motion. The Robert Jones family, McGee, and others had come on board by this time. Bro. Jones chaired the building committee and place were made to erect our present building, which was completed in April 1975.

Under the leadership of many outstanding gospel preachers such as Robert R. Ravenell, The Scenic Woods church is poised to for exponential growth in the new millennium.

Our Minster and the information

Professionally, he has served as a healthcare administrator for two local Houston hospitals. Currently, he serves as a Professor of Government for the Lone Star College System. 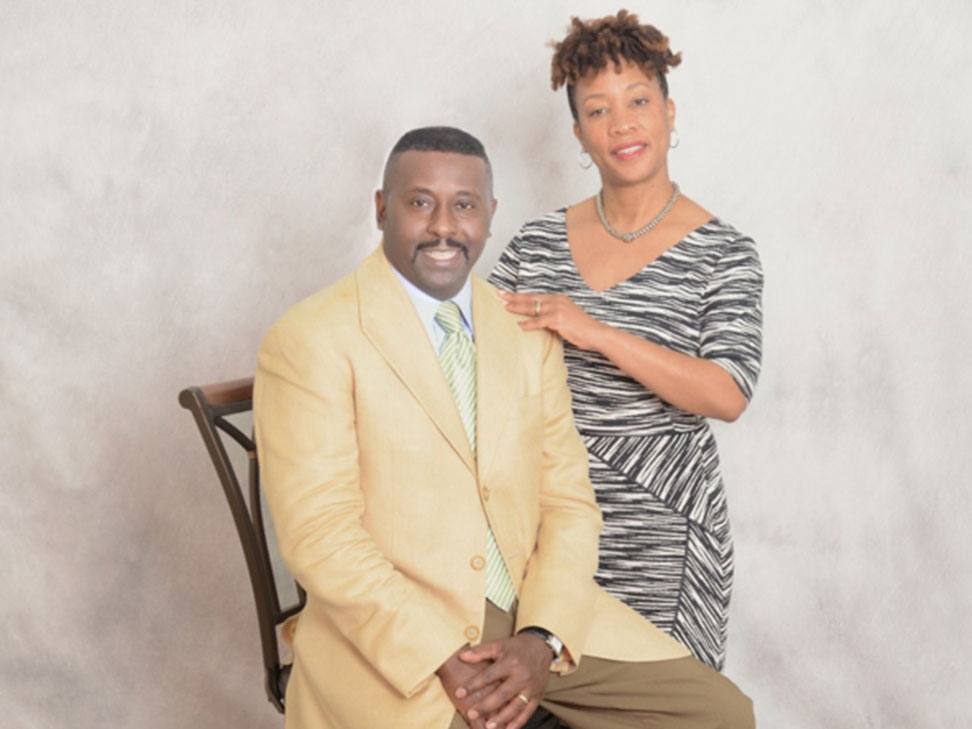 Rick is married to Franchelle Bailey, M.D. and they have three children; Raven a graduate of Tulane University, Richard, who is the starting center fielder player for the Blinn College baseball team and Rachel, who is a high school senior, with a passion for the culinary arts. The Bailey’s have been married for almost 27 years. Franchelle works part-time in order to support her husband, family and the church. She is a dedicated Godly woman, who is committed to Jesus.

Educationally, Rick has matriculated at The University of Texas at Austin, Southwest Texas State University, Texas Southern University. He holds a Bachelor’s and a Master’s degree. He is associated with many professional organizations and is very involved in the Houston community.

Professionally, he has served as a healthcare administrator for two local Houston hospitals. Currently, he serves as a Professor of Government for the Lone Star College System. His passions include great conversation, great politics, great learning opportunities, great travel and great service to God.

But most of all, he loves Jesus and aims to preach and teach the bible to all of God’s children in the world. He believes his ministry is most effective, when all people completely surrender their lives to Jesus Christ. He says it produces a radical, Godly difference! He believes the most important component of the bible is the transmogrifying power of God to a fallen man, that’s seeking redemption. His sole mission is to be a tool for the will of Jesus Christ and to serve the people of God.

The Scenic Woods Leadership Team consist of group of men who will dedicate their time, talents and treasures toward the growth and sustained development of this church.

The Scenic Woods Leadership Team consist of group of men who will dedicate their time, talents and treasures toward the growth and sustained development of this church. Each man loves God more than themselves! The on-going leadership training and development classes and retreats will ensure that complacency and stagnation will not become a hindrance to the church of Jesus Christ. Our biblical example for developing leaders is found in Exodus chapter 18.

Join us for Worship

Penny Gamble is requesting prayers for herself and her family. She also thank us … for inviting her to worship with us. We will be praying for you and looking forward to seeing you soon. Many blessing.
Read more

Everything that I see I see God in it!!! …
Read more

Pray for my evangelism …
Read more

Good morning. I have several family members who are dealing with illnesses and …hospitalizations. I am requesting prayers for healing, strength, and restoration. Thank you.
Read more

Just want to say thank you

Thanks for your prayers and beautiful cards much 💕 to the scenic woods family … &Mrs.Martin
Read more

I am so glad my friend recovered from covid with no complications. God is a heal … er.
Read more

God is so good! I got the Job I wanted and the Salary was more than I asked for! …
Read more

Please pray for Juan my friend in Virginia that he can get well and. walk …
Read more

Thank you God for all you do for me and my family . You are awesome …
Read more

Thank you my heavenly father for your protection on my flight home. Thank my Chu … rch family for your prayers. I love you all.
Read more